Sceptical listeners at a “Your Games, Have Your Say” event in Hackney. A plan of the site lies open on the table.2006

“We worry about what we see taking place under what one very experienced developer calls the smoke and mirrors of the Olympic Legacy.

When you stay in one place for a very long time you watch successive government programmes. Their effect on people’s lives is often quite different from the intention of the rhetoric that launched them.

Many of us in east London are increasingly concerned that these crucial local details are still not understood by the more than 40 public sector agencies involved in the regeneration of the area. I am sure that many noble Lords are all too aware of the Public Accounts Committee’s recent critical report on the Thames Gateway, which describes in great detail the waste of money and human potential in this area. Real opportunities for deep and sustainable legacy in the Lower Lea Valley are being sliced away and lost.

It is not clear today …….. importantly, which of the alphabet soup of organisations has the authority to lead the process. The Olympic Delivery Authority seems to have given up on legacy. It has too much on its plate—I am sympathetic to that—and has passed the baton to the London Development Agency, but the LDA has no track record of creating excellent places for people to live and work. If it does not now engage seriously with colleagues on the ground then yet further opportunities for real legacy will be lost.

When you live and work in east London, you know that the Olympics are not the biggest show in town. They are, as one Newham councillor recently put it, only the third biggest regeneration scheme in Newham alone.

If we grasp this opportunity then we as a nation may have something valuable to share with the International Olympic Committee—some practical clues about how you do legacy in a way that does not leave us, as I have seen at Homebush in Sydney, with a large empty site; or in the position of West Heidelberg in Melbourne where the 1956 Olympics were held and where you can see the effect of getting these decisions wrong on a local community as long as 50 years later.

The problem is that the regeneration structures in east London are a mess. Those of us who try to make them work in practical ways know how serious that mess is and how much energy and time are being wasted. The present structures are confusing potential private sector investors precisely at a time when we want them to commit to the area. There needs to be simplification and some agencies need to go.

“..government understands the shape of the forest but has no idea what is actually going on under the trees”. Lord Peyton of Yeovil (quoted by Lord Mawson)” 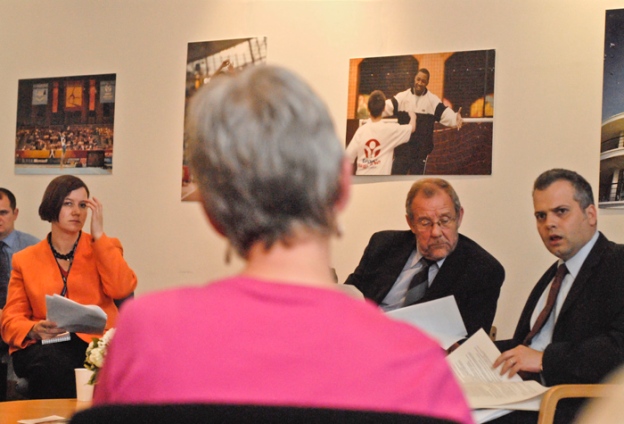 Members of Hackney Marsh Users Group challenging Hackney Council staff about the supposed benefits of the Olympics at a public meeting in Wick. 2006

There was a credibility gap between what people in local voluntary bodies had been told by professionals in the Olympic industry and what locals’ experiences of outcomes was. This happened most to local groups which had been affected by relocations from sites within the Olympic Park.

Public consultation consisted of a gaggle of professionals from the Olympic industry trying to communicate in a short time the bare bones of a mega-event plan on which hundreds of them had worked for months. They thought that their plan would cleverly solve chronic problems of local underdevelopment and neglect which had taken decades to arrive at their previous condition. Then they asked, “what do you think the problems are?” They listened politely but everybody realised that by that time it was too hard and too late to change anything significant.
More focused consultations took place with local voluntary bodies which had been affected by relocations. Responses from them varied from positive engagement through indifference to hostility.

Members of groups like the cyclists of the Eastway Users Group, the Clays Lane residents, the Travellers, and the Manor Gardens Allotments felt that:

• Their expressed needs and positive suggestions were misunderstood and/or ignored.

• Solutions were dictated to them which were hopelessly inappropriate.

• Olympic development professionals were working to an inflexible agenda.

• Agreed procedures for problem solving were not followed.

• Agreed outcomes were not adequately delivered.

• Locals were lied to about events which impacted on their well being.

• Adequate attention from Olympic professionals to solving problems thrown up by the displacement process would often only emerge after locals had achieved national media coverage and/or a date for a court hearing.

The experience of dealing with different professionals from agencies like the London Development Agency repeatedly gave the impression of working with an entity which was in a great hurry and suffered chaotic project management. 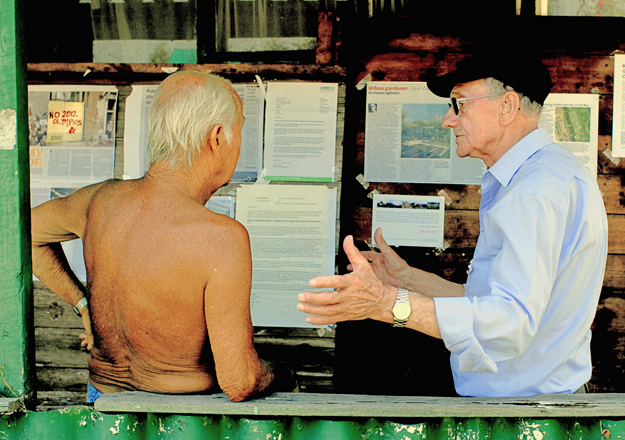 Julian Cheyne, a resident of the Clays Lane Housing Estate and a member of Games Monitor, looking at maps from the Olympic Planning Application. Feb 2007

“Three Games Monitor romantics paid a visit to the Olympic Delivery Authority Planning Decisions Team (ODA PDT) office in Burford Road, Stratford on St Valentine’s Day. We wanted to view the new Olympic Planning Application which is contained in 53 document folders containing hundreds of individual documents, plans, drawings, etc, numbering in excess of 10,000 pages (these were still being uploaded on to their website when this article was first written). It is difficult to determine the exact number of documents from the website as many refer to different aspects of the application. The documents should soon be available to the general public in a set of dvds at a cost of £25 plus postage and packaging or in hard copy at a purchase price of £500.

We were shown into a kind of short corridor the size of a walk-in cupboard, with a couple of bookcases, a small table, two chairs and a small counter on one wall. Another planning Valentino was already studying a set of documents when we arrived.

ODA PDT staff were helpful if slightly embarrassed by the short, narrow space we were jammed into. We were told that originally this area was supposed to include a neighbouring corridor but this had been disallowed on health and safety grounds. No other rooms were available.

The new design certainly had its own health and safety problems. The table was too small to properly accommodate anything more than a couple of documents and we and the other visitor had to manoeuvre past each other or the staff to reach the files in the two bookcases. There might even be a danger of visitors or staff poking each other in the eye with files or injuring one another on the corners of the table. In the interests of safety perhaps this miniscule facility should be closed down by the same health and safety officers and merged with the corridor thus eliminating the consultation space altogether! We had a discussion with staff about the possibility of placing another table in the front lobby although this would not fundamentally alter the situation.

Members of the public will have about a month, until 19th March, to study the multitude of documents and present their objections, although they should continue to send in comments even after that closing date as these will still be made available to the ODA planning committee. The ODA, who have made the application along with the LDA, have been working on this latest application since June 2006, when they made their second revision to the original plans and are, of course, very familiar with the issues.” Julian Cheyne, Games Monitor

“Citizens of big cities are forever being berated for not taking sufficiently active interest in government. It is amazing rather that they keep trying.”
Jane Jacobs, The Death and Life of Great American Cities, 1961