“Sport is a powerful and often under-used tool that can help Government to achieve a number of ambitious goals.” Tony Blair; Foreward to the Game Plan, report 2003

The Blair government commissioned the Cabinet Stategy Unit to consider sports policy priorities for government expenditure ranging from elite sports in international events to popular local participation in forms of healthy exercise. Their vision foresaw a step change across all social classes and many government departments which would ‘inspire a generation’. When considering global sports mega-events like the Olympic Games their advisors told them in the Game Plan report;

“We conclude that the quantifiable evidence to support each of the perceived benefits for mega events is weak. The explicit costs of hosting a mega event should be weighed very carefully against the perceived benefits when a bid is being considered, especially given the high risks attached. The message is not: ‘don’t invest in mega events’; it is rather: ‘be clear that they appear to be more about celebration than economic returns’.

Having been advised of the huge expense of the narrow and shallow returns from previous mega-event spectacles worldwide the government knowingly pressed on with their Olympic bid. Privileging the elitist grandiosity of the spectacular circus to the tough stuff of evidence-based broad social policy. 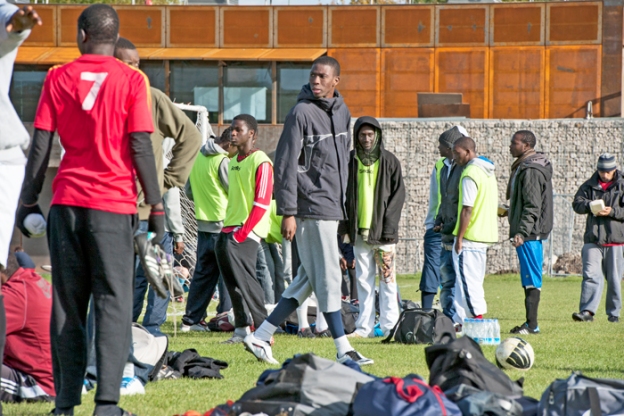 A self-organised group of Africans waiting to see if a football pitch will become available for their game on a Sunday at Hackney Marsh. 2010

“Both the inadequacies of a participation-driven approach to the Olympic legacy, and the unequal nature of sports participation in this country lead us to question whether it is possible for the legacy promise made in Singapore to be delivered. Limited available funding, and the tendency to direct what there is into capital spending and short-term programming mean that it is difficult to see how the money which has been allocated for this can be expected to produce greater benefits for disadvantaged young people. While co-ordinating aspects of the Places, People, Play money will enable more efficient delivery, without more specific targeting for the groups we are focused on, the programme will lack both the scale and the methodology to seriously impact upon participation levels.

Moreover ….even if the participation target were to be reached, it does not necessarily follow that this would produce the wider social outcomes which have been our focus. In this sense, the target was intrinsically flawed from the outset, not just because it was more convincing as a sales pitch than a policy objective, but also because engaging any number of additional people in some unspecified sporting activity is not the same thing as serious, targeted work aimed at transforming the lives of Britain’s neediest people.”

More than a Game: Harnessing the power of sport to transform the lives of disadvantaged young people, The Centre for Social Justice, 2011, p116 (PDF)